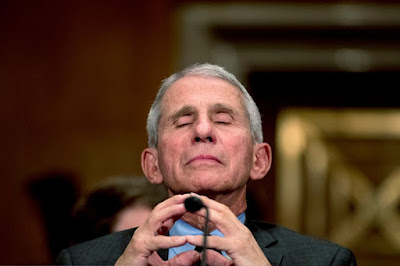 I pray to my money god but those in charge don't tell me things
as they do not trust me....but I believe they will make me immortal too....

The fact is in David John Oates speech reversals on Dr. Anthony Fauci, they prove only two things. that Fauci is a conman and a liar, and that he is harming people for the money. That is important in this food chain to understand, in Fauci is not being told by the 1% what is really taking place. Fauci is just a ghoul in the morgue of humanity, compared to players like the Prime Minister of Australia or the Chinese Ambassador to the United States.

So when Fauci is telling NPR that the virus will not be stopped until the fall of 2022  if the unvaxed are force vaxed, and then the CIA's CNN has to rush out and make Fauci clarify that it was the spring he really intended to say, you are hearing the timeline of the 1% and Fauci got his chain jerked.

The essence of this is the ReVaxNiks are going to be blamed and that is the propaganda driving this, and this is all going to disappear......it already has disappeared as the vaxes are what are causing the problem now a headache and runny nose from the Indian virus is not going to kill anyone.

I know what this is in the matrix, and I would hope that Dick Allgire would move beyond his valed comments as the people in charge have phoned him and told him to keep his mouth shut on events. Allgire will only hint of bad things to come.

The White House coronavirus czar had told NPR on Monday that if enough people get vaccinated, the US could “really get some good control over this” by the fall or winter of next year.

But quizzed on it by CNN’s Anderson Cooper later the same day, Fauci — who has been under fire repeatedly for flip-flopping on his public advice from the early days of the pandemic — said he actually thinks that control will come even sooner.

“Anderson, I have to apologize. When I listened to the tape, I meant to say the spring of 2022, so I did misspeak,” he said

I have told a few people in private what this is as they have been around and not abandoned me. I will tell others if the need arises, but for my safety I'm no longer giving pony rides for free to the rich. If you read, you are being prepared, and you do not need to know what the specifics are.
I have upped the ante in this though as it is going to be a half dozen rich people with big donations that suit my necessities, and not their deciding as I'm done with placing myself in jeopardy for the freeloader rich. God informed me months ago and I published here that I'm no longer responsible for things, as you get your ass in the hole, it is your ass, as you can not be counted or trusted to act like a Christian.

Fauci backtracking to spring 2022 AD in the year of our Lord, lends additional averages in confirmation that the matrix was showing the correct time line. I will say that is it not what you think, it is not how you have been propaganda washed and it is going to weed numbers of people out. So the reality is if you want a ticket to the future, you will pay for it, as no more free rides. The wonderful part is lots of assholes have already been given the boot, and they have no one to blame but themselves as the time line is in motion and you just do not get to jump on again.

So what have we gleaned.

To my children, get prepared as I have been educating you all this time. Do not cause problems for yourself and stop being sucked into the information hype and go enjoy your life in God in this lull. Yes you think this is not a lull, but it is. Living will be work soon enough.

OK time to go make salsa and turn the page on another day which you are in and I have left months ago.