A Tombstone in Time 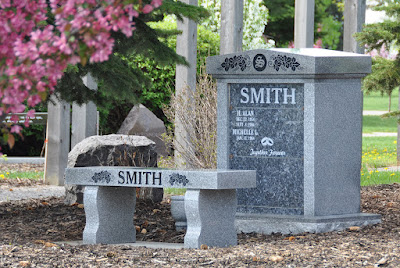 I see by the calendar that it is July 31st and I do not know how your lives of luxury are, but today was the first day I have had with TL, since at least last year if not longer. I simply have not the time to do couple things or even relax. I had planned many moons ago to go fishing this year with TL.  Nothing of that manifested and it is disappointing as hell, as all I get done is listening for God, trying to not go two steps back for every one step forward and begging you ungrateful people for money for reading this blog.

Yesterday though I made up my mind I was going to take TL to town for a fast food breakfast and go sit out at the lake. Being we had predators killing my flock, we were late but got there as I pulled in ahead of some refugee to the Brier Patch.

The lake plans changed too as it was some capitalist venture to bring in outside tards to entertain tards who are lured to the town to do tard things. As I'm repulsed by tards, the end result is we got the breakfast thing, brought along my iced coffee thing and I looked around in the fog of forest fires and said to TL, "Want to go eat in the cemetery?"

As we agreed, as that was the one place most tards were not going to venture, there was shade, a nice wind, it was where we went. It was pleasant sitting there as the cemetery is off the main drive so you can see everything, but still be isolated.

Two kestrels were screaming at each other. I thought first it was cat birds, and then I thought Blue Jays, but as I got out to snoop as I saw names I knew and never knew, TL said there was a bird of prey in the tree, an it was close as to reach out and touch it.

This cemetery I have never appreciated as when it gets wet there is water in the holes when they dig the graves. I can not believe even a vault stops leaking, and I found one grave which was sunk in, as in three plots, so I mentioned to TL about the depression and explained that is from coffins collapsing an no one filling in with dirt. They were old graves, at least old for here. This is a railroad town, meaning it was built for a railroad and the people they would lure to the middle of nowhere. The reason for mentioning that is it makes me sad to see people come from the civilization, having survived the Civil War and born in hope, and die out in this God forsaken country. It must have been heart rending to bury people where there was nothing in this cold or scorching land to comfort those who survived.

I do not know if you ever noticed, but the military uses these white sand stone things for monuments, an after 100 years they erode. Others of these old stones are white, and they get like an algae on them so you can't read the information.

There is a way of telling who lived an who died and when, as the white stones are early from 1880 to around 1900.  I do not know where they ordered them out of, but the came rail freight and then by horse wagon.

You  start seeing a rose granite for a few years after that, and those are big mothers in 3 by 5 feet. It is when you see the black granite that you know civilization has begun in this region, as people simply do not comprehend that you can't have tombstones if you don't have any industry, or they have to be shipped in.

There was one monument, it was tall, an huge, and I will try and take photos of the best looking stones, but this one just amazed me for beauty. There are a type of these stones which are a sort of blue grey, whitish thing. They look like a sandstone, at least on the others I have seen, they looked eroded, but this stone was from 1880 AD in the year of our Lord, so it is old This monument though looked like it had come out of the crate yesterday. It was intricate stuff too in mouldings, an Angel flying over the draped bed of the woman who died, the top had like bed curtains all around in being draped, and there were just little patterns and this was all crisp.

Honestly TL and I examined this for sometime and we doubted it was carved, but yet it looked carved, and it seemed to be something like investment casting which is done for firearms like the old Savage 99 was founded.

I have seen poured cement footings in town on the newspaper shop, an they looked like poured cement in being crude. and rough. This was one of the most beautiful works of craftsmanship I have ever witnessed.

TL and both knew that we both wanted when the donations come in to use this type of method all through our home.  The problem is, I'm going to have to find out what this is as I have not seen any examples of this which matched. Some stones have metal labels on them an I'm hoping I can find another one like this or an example online. It is just another one of those horrid mysteries which always dump into my life, and I have to invest so much energy to find out what it is as no one else will ever know as I know this from experience.

It will not do any good to ask any stone masons around here, as they will all shrug and gives some lame ass answer which is not an answer.

Now I'm going to have to go root around in cemeteries looking for something like this and then hope I end up with some marking on it. If I have to will write to some rock expert and ask them what the hell it is, at least that will be a start if it is rock or some kind of remarkable investment casting.

OH and we saw one form a guy I knew who had him riding horse etched into the back of a stone. That was pretty. I would love to have something like for our walls or for door post etchings. I watch people with money though and mention to TL that all they do is build houses so other people can look at them, not building a house for a view.