General Mark Milley dismisses reports that US intelligence had pre-warned about the likelihood of a rapid collapse of the Afghanistan government and a complete takeover by the Taliban:

"There was nothing that I or anyone else saw that indicated a collapse...in 11 days." pic.twitter.com/uoV654RYoW

In June of 1944, General Dwight D. Eisenhower, leading allied forces for the invasion of Europe on D Day, had drawn up two statements, one was for success and one was taking responsibility for absolute failure and defeat by the German Nazi forces.

It is now proof in the words of the entire United States military leadership on Afghanistan by the incompetent wokester, General Mark Milley, that in all the Pentagon war planning, as Afghanistan is a war, that maybe Afghanistan would collapse without the United States propping it up.

The Pentagon is expected to produce ALL SCENARIOS, and that includes the unthinkable in the Taliban bribing all military leaders with Chinese communist millions to simply lay down their guns and be flown out to the United States, but for stunning reasons, the American SecDef. Joint Chief, State, Joe Biden, CENTCOM or anyone else never asked the question of WHAT WILL WE DO IF AFGHANISTAN COLLAPSES AND WE LEAVE 40,000 AMERICANS HELD HOSTAGE THERE?

This is beyond preposterous as even the rich non donating dimwits here have at least thought, "How is God going to judge me for not donating to Lame Cherry?" It comes to mind the worst case scenario.

The fact is as this blog has stated that the same DIA which stole the election for Pedo Joe Biden for a coming war with China has turned Afghanistan over to China. The Taliban is a tool of the 1% as Chechens were as Tim Ossman was before he became Ossama bin Laden.

So Mark Milley is not only incompetent like wokester Lloyd Austin, but liars producing another war agenda and Joe Biden was too senile to ask any questions, but that is why the FBI is hunting down Americans from January 6th and Dr. Anthony Fauci is making war on the unvaxed as this is about intimidation so Americans do not voice their concerns about stolen elections and a Resident Biden whose main activity for two weeks has been being Birther Hussein Obama in being on vacation.

The US Pentagon has created for imbecile Joe Biden 40,000 American hostages in Afnamistan. America is having to grovel to the Taliban to have people let in to be evacuated, that is not Americans, but Afghani's who are probably Taliban terrorists being flown into George and Laura Bush America to slaughter Americans as Saddam Hussein's John Does did at Oklahoma City which Attorney General Merrick Garland covered up for his promotions to power.

Are these Americans who responded to Biden's travel to Afghanistan homosexuals which Biden wanted out of the country and has now abandoned them, to promote the Rainbow Flag of Anthony Blinken and are now expendable like Chris Stevens in Obama Benghazi? We do not know, save that none of these liberals give a damn about these 40,000 Americans they have abandoned.

The United States lost Asia in handing over Afghanistan. That in turn means that the US allies are lost in Europe. The United States is now alone with an FBI hunting down Americans, Anthony Fauci wanting ReVaxNiks in FEMA camps as he pedo vaxes our children and the Pentagon purging  the US military of White People as it focuses on the threat of Climate Change.

The Americans who allowed the election theft of 2020 AD in the year of our Lord have cemented the defeat of the United States and Americans had better prepare for perpetual defeat until America is a vassal state in a world of ruin. 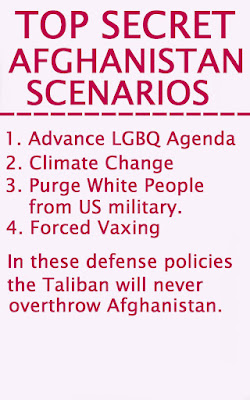