Thank the gods of DC that America has such a brave hero
in Lt. Michael Byrd saving countless lives by shooting unarmed women

I have been puzzled for sometime in my offers to sell out here, have not been accepted, as I said I would inform everyone I have become an operative and then the Lame Cherry would be earning vast sums of money as is always the case with regime platforms.

The information I came across though indicates what my problems are, in first you have to work for the regime. I know people think I'm "CIA" or some off the books black operation where I can zap people with a laser off a Reagan Star Wars satellite, but I'm not a paid or unpaid government agent. Sure I have Vulcans as friends and it is complicated of sorts in alien races, but the only off planet I work for is God and He is on planet most times, so ......let us just move on in what the problems are in earning money, because don't you think if I had a buzz ray to control you minds that I would have had you donating vast sums of money your investments stole from poor people, just to even things out as I'm not a cheap date, even if people treat me like a whore.

It was these stories which prove what a problem I have, in two of the "White Supremacist" groups in CanAmerica were employees of the FBI, Department of Defense and Homeland. They even had letters saying what great guys they are.

So my problem is I have never worked for the intelligence or security agencies or bureaus and secondly I do not have letters saying what a great guy I am.

In response to this, the FBI, in conjunction with intelligence services around the world, invented one.

Documents filed in the case of Kaleb Cole, who is accused by the feds of being part of an Atomwaffen Division (AWD) conspiracy to terrorize journalists and minorities, have finally confirmed National Justice reporting from January that exposed Joshua Caleb Sutter (pictured above), the leader of a Satanic pedophile murder cult who took over Atomwaffen in 2018, as a long-time professional FBI operative.

Sutter has been employed by the FBI since 2003. Starting in February 2018, he was paid over $82,000 to take over Atomwaffen and transform it from a mostly online based art group into a household name for "white supremacist" terrorism and moral depravity.

The works of the Tempel ov Blood, an American chapter of the Order of Nine Angles (O9A) run by Sutter and his partner fellow FBI informant named Jillian Hoy, has helped inspire a recent rash of ritual murders in Canada and Russia.

Being a Christian I also will not front for a pedophile murder cult for the FBI. I do not know if the FBI has a bestiality murder cult, or other kinds of murder cults like .........I simply don't know as I do not go perv stuff, but apparently this is how you get the big pay checks from the FBI in Christopher Wray in you have to run a cult, after you are working for the government and have letters saying what a great guy you are. Then you get like 200,000 dollars.

Apparently also, you have to do Nazi things. That again is a problem as I'm not a socialist as they are leftwing and God is not left wing. It also is critical to have new Nazi names for your group and while I can see why as German names are really sexy, I just am not really into that kind of stuff, nor as I have noticed that you have to dress in sooty colours and grow a beard longer than Moses.

You also should never be outside as the leaders the government chooses all have Vitamin D deficiencies, which again, probably means Coronavirus will kill them, so maybe that is the government's retirement plan, but that does not seem financially sound as they already have paid millions so what is the point in getting rid of your employees after they have created terror groups for you. 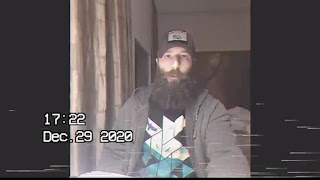 The Department of Homeland Security (DHS) confirmed it once employed an American neo-Nazi terror leader now based in Russia after he posted what he said were letters of appreciation that DHS and the Pentagon sent him thanking him for his service.

Earlier this month, Rinaldo Nazzaro, 47, founder and leader of the Base, one of the most violent American domestic terror groups in years, posted three undated letters from U.S. agencies lauding him for his service. One was from DHS—an agency tasked with thwarting terrorism in the U.S.—and two were on Marine Corps letterhead. All spoke glowingly of Nazzaro.

Again though into this, this is just the left wing Nazi's in this. We do not have even after Jan6, any information on the funding George Soros gave to ANTIFA and Warren Buffett gave to BLM.

We still do not know how pretty Alexandria Ocasio Cortez was employed in her leadership, as while she is gorgeous, she has ugly leftists around her. For some reason she is in Congress while the men folk are in beards and drab colours.

I believe these are my problems in I could not be in Congress, in drab colours or be associated with ugly people. I would think that somewhere in this police state that there would be a need for a group of only pretty people who would do pretty people things. Like a pretty people cult, like Hollywood or what was Hollywood as there is nothing that attractive there now in lesbian males.

I think a Star Trek kind of cult would be good, but not the weirdos of comiccon even if it pays well. But pretty women in space mini skirts, who shoot guns, are very prejudiced in hating people not like them, like cheerleaders in high school and college. Sadly they do that for free and the FBI does not have to pay them, even if they have lots of Whites involved, but allow in token ethnics to show critical race has a purpose, but again, cheerleaders do not shoot guns off.

I think I could go for, attractive women dressed in Nazi like tunics, who shoot guns off, will  not let in ugly people, as a group I could lead, but again, I have not been employed by the police state. Maybe in this era of Birthers in the White House in Obama and Kamala, the Lame Cherrya could have this waved and Christopher Wray and Marine Corp could write letters how great of guy I am, say I would look good in sooty colours if I wore them and wear a beard well, and then we could move past all of this and I could start receiving my 200,000 dollar checks from the FBI, Homeland and DOD. I think that would be like 600, 000 a month. I could work 5 months, no 10 months as I have to pay my IRS taxes and then we could hand it over to like Hunter Biden, Malia Obama or Ivanka Kushner, and they could do a great job as leaders of the pretty people who are a threat to the ugly American majority.

I simply did not know that to be successful in this you had to work for the government. Oh well my loss is probably your gain, just remember when you are running a cult for the FBI or Homeland and you are earning the 200,000 dollar checks to donate here, as you found out the pot of gold at the end of the rainbow is really the paycheck at the end of Washington DC.

Just the way it is, the Judges and Agents who throw criminals or Jan6ers into prison do not earn what the people working for the government breaking the laws get rich by.

I would that there were articles online of the government paying people lots money for being honest, but that does not seem to be the case.