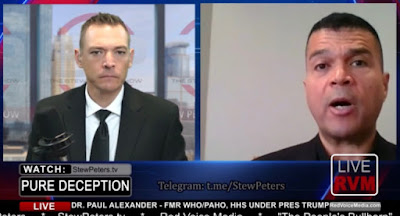 It is important to your not following the lemmings over the edge to understand what media platforms on the fringe are being set up to lead you again. Remember in reading this that Donald John Trump in Georgia told people to be vaxed and was booed. Donald John Trump again joined Pedo Joe Biden telling you to be vaxed. Those are the realities.

Now the DIA in sending out Q Peters and a former Trump staff member is stating that the medical authorities lied to and clashed with Donald Trump in this pandemic propaganda.

It can not be both ways. Either Trump was lied to in 2020 AD in the year of our Lord or Trump was joining in the lie, and is now lying to Americans to tell them to drink Fauci's green serum in a syringe.

The propaganda is there to produce a false narrative to protect this Trump Kuschner failure of Americans who trusted them. We have been informed that Donald Trump will indeed run for President in 2024 AD in the year of our Lord. I have had conversations with people who are blind Trump supporters. They will not look at his real record.

I have received reports that Trump 2024 flags are flying all over western Minnesota and into the Dakotas. This is a sounding board on what is coming. There are nothing but fraud GOPliters out there who are engaged in stifling the political actions of those who care about America.

The National File is promoting Q Peters. Q Peters is as Jeff Rense noted getting all the big names. Q Peters will replace Alex Jones. This is a smooth Edward Lansdale operation and no one is calling this out, including Dr. Jerome Corsi. It is not just DIA Steve Bannon in this mix. Propaganda platforms are being groomed in this and you are going to get a narrative which is not the reality that Donald Trump left all of Barack Obama's communist policies in place and left all of you to be hunted down by the FBI.

For your tomorrow's sake, this is not anything to get involved with. You do not need to be the next Jan6er and you do not need as a Protestant Christian any part of this drama again. Just because you like the lies, does not change them from being lies when they benefit Donald Trump. Just remember from vaxing to sodomy to pedophilia to election theft to the police state to leaving you exposed to all of what Donald Trump WILDED in DC, Donald Trump stopped nothing to preserve your way of life. Things got worse and for the DIA to be covering for Donald Trump and all of his Second District New York legal problems have gone silent, this New Yorker just as Hillary Clinton had legal problems in 2007 which disappeared in New York so she could run for President, is the same situation that Donald John has worked another deal to be your pied piper and you are the rats again.

Stay with Jesus and let events unfold with your not being swept away by them.

Former senior Trump administration Health and Human Services COVID-19 advisor Dr. Paul E. Alexander made an appearance on The Stew Peters Show to state that the Coronavirus Task Force had deliberately deceived the American people, detailing the infighting that occurred between the Task Force and President Donald Trump while he was still in office.