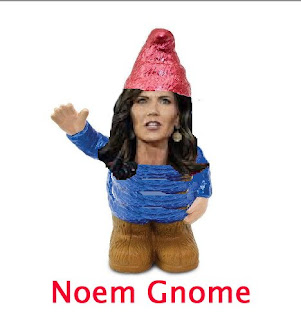 The true lawn ornament of South Dakota and Donald Trump's legacy is Governor Kristi Noem. For Americans who believe in Patriotism, they are being snookered as much by the Governors of North Dakota, Texas and Florida. If you look on the surface Noem appears genuine. It is when Noem though is behind closed doors that one begins discovering what she is, why she failed in the US Congress and was sent to South Dakota, to not save that state, but flip it for 1%.

That is what all of these governors are engaged in. You can not pour in millions of foreign vermin and expect those GOP states to remain Reagan Blue. They will in the near future become communist Red.

For Noem, her telling treachery was in keeping South Dakota open, not for the People, as the People out there do not pay attention to their regime and would have gone without masks anyway. What Noem did was keep South Dakota open for Mexican and foreign slaughter house slave labor at the Chinese meat houses run in that state, set up by fellow culprit Mike Rounds now a US Senator who like John Thune governs to the Nazi left.

Kristi Noem has one purpose in the political scene now. She was taken down by Bushite Tucker Carlson due to the simple fact she is not an Indian whore like Nikki Haley, and Donald John remembers that Noem tried to sabotage him in Pussy Grab. Trump is looking Cuban in Ron DeSantis as his running mate with Haley as an outside possibility. The fact is South Dakota has zero votes or electoral college value, in stolen elections that does not matter, but to the 1%, South Dakota has nothing to offer that the Carolinas, Florida or Texas has to offer in real rapine.

Noem played this well as she handed out lovely rights to South Dakotans, and then she took them away. She then played whore for the Chinese slaughterhouses, and then played whore for the Chamber of Commerce for kiddie rape in the bathrooms by pervs. South Dakota at this moment is basically controlled by a Denny Sanford who owns the hospitals and on Rense he is called a pedo, along with the credit card industry. This is a state held hostage the way North Dakota is held hostage by oil interests as that state moves to be flipped communist to by their GOP leadership.

What Kristi Noem does though is slight of hand. The 1% employ her as an information gathering tool of what is happening behind the scenes in the American framework as she does get invited to events more than you would ever know when she is not headlining at GayPac.

The best way to explain Kristi Noem is while she discovers that now is the time to control aborticide drugs.......yes she had this power 3 years ago so why wait as children were poisoned in the womb (She did not have permission from the 1% as aborticide is gearing up as the Trump Triumph) Gnome Noem is on the phone and on the free meal banquets, telling those who are working to try to save America, that their ideas will simply not work.

The Coronavirus Queen is also the Cold Water Queen. She is an agent of the left, meant to string things along until the overthrow is complete in, "We just simply can not do this as it will not have any support."

Remember her kiddie rape protection in the showers stance. That is what Kristi Noem employs in every issue.

Kristi Noem is part of an agenda. She reforms nothing. She signs gun bills, but then puts Americans into jeopardy over being fired for protecting themselves in not being vaxed. The Socio Conglomerates control Kristi Noem and that is the basis of every one of her positions.

This is a warning to those in Republican owned states in do not think yourself protected from the Biden regime, because Noem has proven she will throw Americans under the vax bus. She was once thought of as the future of the GOP, but her treachery nullified every last iota of support for her. She is the naked Queen in exile still appearing at gatherings pretending she is clothed in Ronald Reagan, just like Mike Rounds, John Thune, Mike Hoven, Ted Cruz, John Cornyn, Marco Rubio, Rick Scott and Kevin Cramer, they are all as leftist as Joni Ernst or Ben Sasse.

You are going to get the rudest of political wakenings for trusting in these people.

Like America, South Dakota is finished as a state.

Remember what Webster Griffin Tarpley predicted that America would be ruled by democrat nazi and democrat communists, with the GOP being a worthless 3rd tier group. Kristi Noem is accomplishing this in wiping out that state and wiping out what was the Republican Party.

Name one thing the above group has engaged in to stop the overthrow of America? They have done nothing but help the 1% because the 1% is who they all answer to.