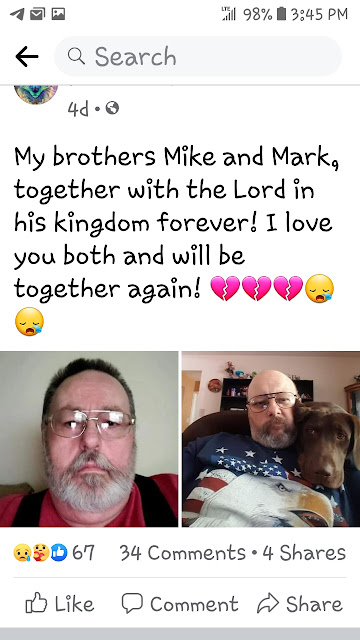 The Lame Cherry desires to note the passing of two of our family here in Michael and Mark. In this saga for the Spirit of America, these brothers gave their all as certain as the men of Bunker Hill or those trampled to death on January 6th.

They stood for America and were absolutely loyal. They would be alive today if someone had not decided to take biological weapon research and fund it in Wuhan China, and the forces behind it, decided to seed a deadly strain to keep up the Fauci pressure with Dictator Biden to inject synthetic prions into humans to begin to evolve them to transhuman forms.

Michael  and his brother Mark both passed away from covid (or the hospital protocols). They both had health problems. I don't know details other than they developed symptoms, got tested, got worse, went to the hospital, were released, got worse ,went back to the hospital and both passed away last week within 2 days of each other. I'm so sad about Michael. He was always posting cutting edge stuff on Facebook-funny and uplifting stuff and he loved baby boomer trivia. We posted on each others walls whenever either of us was in Fakebook jail. He let all my friends know that I'm in fb jail now. I posted that Buydem should hang for treason and Fakebook restricted my account for 30 days.
Anyway, Michael read your blog every day and would often ask me if I'd seen a particular post of yours. I know that he respected you a great deal. You've made a big impact on many and he was one. I thought that you'd want to know, even if you may not have heard from him. I know that he lived in Florida with his brother Mark and their sister Ruth who is also recovering from covid. They were originally from Ohio.
I always hate to write with sad news, but I think Michael would have wanted me to thank you.

I'm thankful for Michael and his family. I would that they were not of the fallen Heroes who made their stand for Liberty and Justice for All in the hardest of decisions and the scariest of times. They are now where no one can touch them.

I'm an absolute believer in God's reckoning. God does not forget nor forgive the heinous acts which are being done to Americans. He allowed such things to take place when national sins in Israel and Judah polluted the nations. Yet Assyria and Babylon who He chose for his balance, were visited and laid waste for touching His People. There will be a reckoning over all of this by God's Hand, as no human could be thorough enough. Remember in the Old Testament in God speaking of these times that He said He looked for a deliverer and none was found, so God by His own Hand delivered the People.

These are what American Martyrs look like. They chose the sacred thing even though all are scared.

God rest them. God avenge them in the Name of the Christ Amen and Amen.