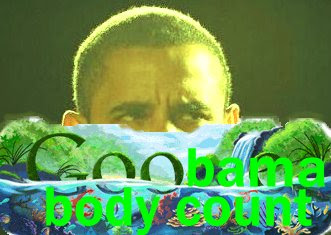 If people have not noticed, a number of bodies have been piling up connected to Barack Obama. Some are connected with his secretive passport files being slain by gun fire as they sit in their Church parking long while cooperating with federal investigators and some throw themselves in front on trains in Germany.
Box cutters slashing wrists in office buildings, all make this Obama body count sound more like an Agatha Christy novel in things not matching patterns.

To the point in some of these cases like Donald Young, there is absolute murder involved with Chicago PD burying the case and the feds being warned off the case, while in the case of Freddie Mac's newly appointed CFO, 41 year old David Kellerman, there is no reason to believe police in saying this was a suicide no more than the story that Admiral Jermy Borda or Vince Foster somehow shot themselves numerous times in committing suicide or somehow shot themselves at the White House with a different weapon and then drove themselves to Ft. Marcy Park.

I do not believe that there are any surprise suicides. There are only people in denial or so self centered they don't want to reach out to people who murder themselves, who need something to relieve the guilt "in they just did not know".

While the story and data is fresh, Mr. Kellerman apparently committed suicide twice. It is reported he shot himself and hung himself. The caliber means things, the shot being in the brain or the heart, the object one chooses to stand on, including the position in the house.
Mr. Kellerman was in the basement of his million dollar home,with apparently his family upstairs.
To shoot oneself and make doubly certain one is dead by hanging is overkill and not an emotionally distraught person "throwing themselves in front of a train". You don't take cyanide and throw yourself in front of a train.
The question is why shoot and hang yourself.

This does not appear a silencer event equal to the DC Madam who was upbeat and logically was murdered by a duo of contract murderers meant to keep the lid on her stories.
This does though appear to be a case where Mr. Kellerman who was part of an SEC investigation while being the CFO of Freddie Mac since last September, that he knew a great deal of what was occurring in this massive Ponzie Scheme Barack Obama and his benefactors were a part of.

This was not about Charles Grassley making cryptic comments about financiers committing suicide as Wikipedia is leading this away from Obama. This is about Barack Obama in the least hounding, harassing and terrorizing lenders for his political gain in screaming about their bonuses, which are better known as hush money to keep people from talking about the rapine of the US economy by the Europeans who back Obama.
At the least, Barack Obama gave the rope and loaded the gun for David Kellerman and at the most David Kellerman was informed for the sake of his wife and daughter's health, it would be better if he took a basement drop on after eating lead.
This is why someone ends things in such a permanent manner as if they screw up, the Obama reaper will show up and inject potassium in them for a heart attack and follow up with a distraught mother double dosing herself and the surviving daughter.

David Kellerman in this, with his wife and family, in his period of time had a million dollar home. His family was noted for having the biggest holiday decorations, this would include as of February 14th, Valentines Day.
This denotes on a scale the need to be looked at, to draw attention to oneself and a flamboyance. People who worked with him stated he was enjoyable and fun to work with.
If one adds to his penance before all of this in being a volunteer working with the homeless, Mr. Kellerman had a profile already of suffrage for his guilt.

People who want people looking at them do it for self esteem which drives them in the need for attention. People like David Kellerman do not have crimes or other embarrassing things they are hiding, because they are screaming for the world to look at them.

David Kellerman might have committed suicide twice, but the question of thoroughness leaves a clue that he had assistance in someone leveraging him to find the silent solution or it would be a silence which would engulf his family.
One does not murder themselves in the home they are calling attention to. The basement is like the wrestler Benoit, but remember that he murdered his wife and handicapped child.
Mr. Kellerman kept his family unharmed and untouched, so he was protecting them. Choosing one's own home is the place they are secure and it is relate to the originator problem of the housing lender Freddie Mac.
One can traumatize a family to make certain they remember them, one can also murder oneself in the house to call attention while in the bosom of their security, to make certain that attention keeps their family safe.

5 am is the time police were called. One does not wait all night to murder themselves after a night's sleep. One uses the cover of darkness to hide the event as a basement or going down hill.
Suicide occurs in the afternoons and evenings as the day is finished, light is fading and there is no want to face the next day.
Events pile up and trigger actions by guilt and remorse. One does not wake up and say, "Do the deed".

It does not fit the human profile. This fits that someone outside pushed David Kellerman who was full of life, successful, cooperating with the SEC and calling attention to themselves not 2 months before on Valentines Day into this.

The Obama body count is eclipsing the rate of the Clinton administration...........and that is interesting.