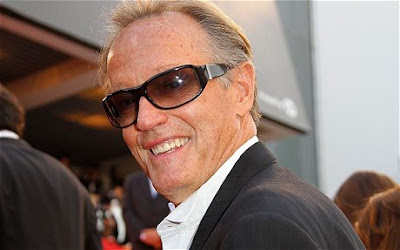 I like Peter Fonda. I know that sounds like I'm off the rez, but I have always liked this guy and he has just wasted his talent for his entire life as he is a very good actor like his old man.

Jane, she is a different story, as she is an Obama botch upon the American frontier who should have been hung for being a traitor..........even if Peter probably agreed with it all.

It is strange though that I like Peter Fonda. I like Alec Baldwin too, but then I have a fascination with Hitler, Khadaffi and any of the big leftists who just make me laugh in their bluster and how dangerous they can be........they are great entertainment from a distance and if they are not causing mass death.

I'm puzzled though in a way, about Mr. Fonda, even if I appreciate his candor in having created a nation which produced Barack Hussein Obama, and now Mr. Fonda is spouting off about taking up arms..........as Fonda fully gets it that America is the "have and have not" society now, and when only this blog was pointing out that Obama was taking all the old cars, old houses, and thrift store goodies and giving them to Mexican illegals........well there is going to come a time when push will come to shove.

Mr. Fonda though would do well in teaching his grandchildren to not make himself or them a target. He would do well to the advice of Mike and the Mechanics in the song Silent Running which is a very good rock song, but even better advice.

Do not believe established religion and governments in everything they tell you.......teach your children quietly at home as someday they will rise up while we stood still.........as you swear allegiance to it all.

See my children, you are in the Soviet system now. The KGB has been replaced by BATF and the Obama run federal police like in Tuscon who all an assassin in Gabrielle Giffords to send a message to Sarah Palin and then blast an Iraqi Veteran in his own home with so many holes you can see through the corpse.
Yes the same Obama Dupnik is joined by all sorts of Obamites instituting the regimes "Napolitano spy on you" regime and if they do not like it, they shoot you.

Peter Fonda has told the world now he has trained long range snipers in his family. Problem is the Obama SEALS have the better arsenal.........they also have microwaves and other things to stop your heart and make you quite radioactive sick if they please to eliminate you silently.

My beloved Uncle was a farmer rancher. He gave me some advice and my brother too through our lives. One piece of advice was, "When you get stopped by a cop, act like a dumb ass farmer. The police expect you to be ignorant so play the part and they will let you go."
The other piece of advice was, "Fix your tail light son, as if you got your tail light fixed, the cops do not have a reason to stop you and find that beer in your trunk."

You can learn a vast lesson from the Chicago South Side in those folks never know a damn thing, never see a damn thing and look so Oprah that the police figure they are not worth a damn thing to bother.

My line of work makes me a target like Jeremiah the Prophet. I have to speak what God says though and trust in His protection, though at times I have had events take place which have almost cost me my life and left me quite ill. I though would rather be minding my own business as I dislike it immensely when that racist Bill Gates steals my email account, when Obama has contractors terrorizing me, and being a popular date with Naps is not my idea of a good time.
There is a reason I keep my distance from people...............the first is I have a number of Obama players showing up scoping me for information and the second is, you do not become a target with everything to lose if you are not close to me.

That is what the problem is with Peter Fonda, God love him. Instead of spouting off about a Texas 1840 war which they were blasting Mexicans and Indians in brush warfare, Mr. Fonda I would invite to invite all of his liberal friends whose good intentions paved this road to Obama hell, and honestly give Sarah Palin a chance in backing her over Obama.
Raise money for her, and fully understand she is not going to sodomize, abort and create more home grown terrorists. Give her a chance of one term without Karl Rove political rapine and raise hell with your Schumers and tell them to shut the hell up as things have changed.

Let's get America energy independent with cheap gas and oil, which we have, and then start putting in the auxiliary systems to help out in energy.
Let's join with Japan and England as our trading bases to create two more allied superpowers to deal with Eurasian communists.
Let's stop getting into all of these wars. Let's stop allowing the central European cartel to fan the flames getting us into wars. Let's just get some Reagan and John Kennedy basics we all can agree upon in fixing America, securing America, and when those Eurasians start their next world war, lets not Wilson and FDR put America into the damn thing as it is none of our business.

This has bothered me greatly that Mark Levin has had at Tom Moore on lecturing at people about sodomy in the White House cop killer rapper and then he was being rude in "America had to get involved in World War II to stop Hitler".
This is bullshit in the horned degree and I know I digress here, but it is linked to Peter Fonda.

Charles Lindbergh, didn't want America involved in those FDR wars which Roosevelt let happen. A sure as hell better policy would have been to have told Hitler, "Look you keep your hands off of Jews, Gypsies and whatever else and we will stick them into their own country in some dust patch.
What the hell you do in fighting Russia is your business as those commie bastards are dying under Stalin already".

The same thing should have been done with Japan. America could have said, "Look you Nips, you need land and the west has been colonizing everything.......so you get some chunk of Africa to farm and get resources from.......leave the Chinamen alone as there are too many of them there".

America could have traded with these not at war nations, and America would have subverted, converted and dominated them with our economic power and resources. Japan and Germany went to war as they had no resources. It is utter ignorance to go around blasting nations and starting wars the way FDR has and the way Obama has.........and then have Mark Levin and this rabble cheering about sticking it to Khadaffi or bin Laden and not comprehending that making Muslim militants assets instead of expensive terrorists only gets American killed and these same Obama butchers seizing more power for their cartels.

I have offered this previously and I hope it takes hold. Peter Fonda and Alec Baldwin with RESPECT should go to Sarah Palin and work out a Reagan projection they can back. Sarah Palin could give them something in return which is not some abomination sinner laws or other crap to destroy society........and then just go forward and remove this regime, and make certain that Judges are in place to hound this cancer from America.........so we don't have to be training in long distance rifles and taking rounds ourselves.

We really need to get Americans back in charge, and as Obama has put into place every liberal dream of Jane Fonda and things are sinking fast.............Peter Fonda has it right in things need to go in a new direction.

In knowing federal police and warfare though, revolution gets only the good people dead in piles. We need to simply have the left admit Obama is a fraud, and turn loose their movies and media on him, and the cartel will back away and will attempt to implement things backdoor through the next Administration.
Peter Fonda needs to focus on that problem and then not blame Sarah Palin, but hold her to the line too so things do get fixed.