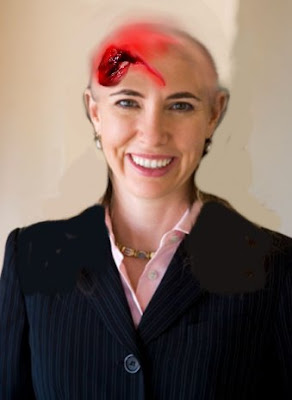 It is quite convenient that Jared Loughner, like in the old Marxist days of the Kremlin has been ruled insane by the Obama regime and will not be afforded the opportunity to face his accusers nor for a jury to hear evidence.

Not to besmerch American Hero Terry Lakin, but it seems strange in all of these Obama era cases that people ending up in Obama court like Rod Blagojevich never get to present evidence unless they hang themselves first.

We are hearing a number of "It sounds like" from the Obama puppy press as Jared Loughner was dragged from court in, "Thanks for the freak show. I watched her die in front of me".

I will not apologize in this age of Sheik bin Laden reported dead a decade ago and then Obama has him murdered.........and then dumps the body in the ocean before Allen Derschowitz can examine it.............but is Jared Loughner actually speaking to a fact in, did he watch the real Gabrielle Giffords die and what America has been watching is some Ray Bradbury Farenheit 451 propaganda carried out by the regime and husband Astro Elroy Jetson, as Tom Moore filling in for Mark Levin confirmed the exclusive broken by this blog that husband Giffords is going to run or her seat as a Democrat............

You forgot 451 in the federal police were tracking down the hero of the book, had it all covered on television as people watched the robotic canine stalk the quarry............as the hero watched it all on television too........and it was some bum in an alley who got the lethal injection?

Is this some street urchin Obama picked off the street as a Giffords stand in, chopped this schizophrenics head open and since that time, this lobotomized homeless gal has been the miracle of Obama, and the real Gabby was the first guest of the Osama bin Laden permanent ocean depth retirement community?

Is Loughner speaking of the "freak show" the same Lee Harvey Oswald stating he was being set up and was a patsy?

It has become so horrid with this Obama regime, that if their lips are moving, it is another lie coming from them.

Silence is how this regime keeps the lid on in a dead bin Laden tells no tales of Obama terror negotiations and a crazy Loughner is kept locked away forever confessing a reality which the regime states is nuts.

Is this the reason only this blog has been championing Gabrielle Giffords in trying to protect her from the assaults carried out against her, is because Sean Hannity and the front benchers know she is already dead and it is just some Terri Schiavo giving Astro back rubs...as you know those Special Olympics kids are all jokes in the Obama way.

This is now the conspiratorial world of Barack Hussein Obama in what he has created as it all sticks.
Egypt and Libya are not about Muslim liberty, but about Obama stealing oil and power in the Mideast for the European cartels.
Obama lies to both Jews and Palestinians in giving them the same land.
Obama won't call Nidal Hasan a Muslim terrorist..........and where is his trial, is he nuts too?

Then there is the set up of Rod Blagojevich. The Hutatree set up. The set up of Lawrence Sinclair. Who murdered Donald Young? Who was the second gunman in Tucson who delayed ambulances from arriving at Gabrielle Giffords shooting?
For that matter why were bullets bouncing off of Democrats in Tuscon on that same day in their being rubber?

What about the big ones like who really died in Pakistan? Was it bin Laden? Where is his missing son? Why won't Obama release the photos?

What about the Everest size one in Obama's birth abstract which is now so phony, fraudulent and freak show, that Jared Loughner could have been quoting that bogus release from this regime?

It just starts snowballing when you have a sociopathic liar like Barack Hussein Obama doing all of this, because it make Jared Loughner look sane.

Why doesn't Obama want the second gunman in Tucson coming up? Is it like Bill Clinton not wanting John Doe coming up in the Oklahoma City bombing as he was a federal stooge directing all of this?

Sheriff Dupnik blame the right wing and Sarah Palin at the behest of the regime in a pre planted smear campaign to get her............now Dupnik is riddling the bodies of Iraqi War Heroes in their own beds like the Obama SEALS did bin Laden, but hey it is Jared Loughner who is the lone crazy gunman in Tucson......so just move along folks............

The way Obama scrubbed up the bin Laden murder in the way the patricians destroyed the John Kennedy murder scene death limo............I frankly am surprised that Obama just didn't wipe Tucson off the evidence map in some nuclear accident.......

What was that story?

Oh yes, something about the Tea Party mixing Orange Pekoe and Oolong and it caused a nuclear detonation.............we know this to be true as Naps Napolitano read it in the snot she smeared on her sleeve...........

You forgot that one too didn't you children in no crisis was to be wasted in how Napolitano terrorized Americans all summer in 2009 with that damn Obama flu, wiping snot on her sleeve as her medical advice, as this regime knew very well as was exclusively reported here that all people needed to do was rest, drink fluids and make certain the turned over so pneumonia would not set in............

You forgot about Obama's sabotage in the GOP Gulf last year in Deepwater Horizon which he drove up fuel prices all so he could go green.........and go murder Khadaffi as BP is drilling that gulf now too?

At least Jared Loughner was polite in thanking the regime for the freak show...........Obama expects the world to thank him for his freak show.