Barack Obama is getting expensive.

Do you realize in the dismissal of the Orly Taitz case just how much is required to get a federal judge to drop a case, looking like a fool, AFTER HE ISSUED THE ORDERS TO SEE OBAMA'S BIRTH CERTIFICATE?
There are only two reasons the judge would do stoop to being humiliate, and the first he was paid off which is not likely and the second, he was threatened with the dirt from his past to going 6 foot under, as this is the kind of expense the cartels have undertaken now to keep their Obama child in power.

This is nothing to be discouraged about, but to be celebrate. Yes the cartels enjoy this torture of America by Obama, but this took place during their summer vacation season. This took place when they had all these events staged in another Team Six assassination of high profile Muslims to cover this up........and instead Obama got Team Six murdered themselves.
THAT IS EXPENSE, and the cartles hate expense in capital or graft.

Examine this in what the sappers learned with minimal effort:

We now for certain that there is absolutely no Obama birth certificate. (I have noted before that Jerome Corsi and Joseph Farah already knew this for certain, but now he rest of us children have confirmation there is no COLB.)
How do we deduce this? If there was a COLB, they would have allowed Taitz to see it and end this all by humiliating the Tea Party.

Do you really think Levin, Hannity and the Coulters would not ride this for Obama in castigating Dr. Corsi, and all Americans for every not towing their Obama line?

When this blog noted that the major players were involved in the forging of the Taitz court documents, it was a witness that the game hand changed and the folks who murder William Colby and get away with it, were involved.
This is expensive, and is not some Obot slinking around. This is tea time being interrupted in bed with bonzo and sex perverts do not like their bonzon interrupted for anyone.

Whether this blog warning that perhaps a fire might start in the COLB vaults, prevented such an event, it is unknown at this point.........but we do know for certain now that the cartel will not engage at that level in burning up all the Hawaiian records to save Obama.
Sure they will blast the brains out of a guy on the east coast who knew too much about the original examination of Obama's government records in a church parking lot, but the cartel will not burn down the house for Obama.

Perhaps there are other family members in that COLB vault the cartel have illegally registered they need the records for on Whore Island.

These are all patterns, and these patterns reveal costs, which these Rothschild bankers detest. This was a matter of threats, coercion and leverage which were successful, but judges do not appreciate such things.......and judges start keeping records of intercourse to protect themselves, other folks like in Hawaii start gulping hard in knowing how dangerous this all becomes, and they start making files to try and protect themselves.........and in all that nervousness, people just start watching the cartel more closely.........and the cartel does not like being watched this closely.

I did wonder here just what the cartel was going to engage in, as while I hoped for Obama being exposed, what instead happened was a perfect operation in exposing the cartels protecting their fraud child, B. Husein Obama.

Do not be discouraged children, because the Birthers have crippled the Obama re election to it's demise........and now that monkey the Rothschilds were leading around, is the monkey leading them around as the little imp keeps growing to a King Kong size weight dragging them through the muck.

Oh look, there are the Rothschilds with their pet Obama, but the crowds are now not cheering, but jeering at the circus act the cartel has become in laughing at the power elite.

God has the last laugh. 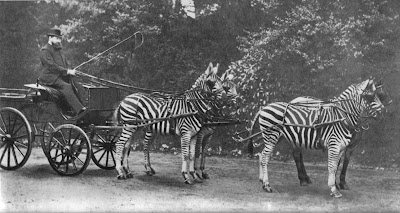 Tell Walter to bring around the coach, pip pip, there's a good boy.