Who attempted to down Marine One? 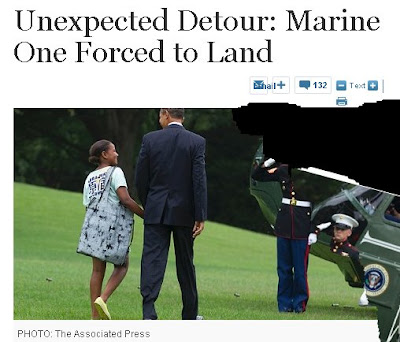 Something absolutely bizarre happened today, September 2nd and the White House lied about it, as they lied about the murder of Sheik bin Laden, the Gulf Gusher, the Birther issue.........etc....

Obama was en route today to Camp David, and Marine One was diverted to an undisclosed Frederick, Maryland site, where a motorcade assembled for the rest of the trip to Camp David.

ABC News reported light winds of 10 mph, no precipitation, and cloudy skies. None of which are "weather related" as Jay Carney the press spokesbabe lied about to reporters concerning.
In fact, the dead pool reporters when bad weather initiates, always go along in motorcade for the trip.

As an exclusive, this was an assassination attempt on B. Hussein in an aerial attack on Marine One was going to take place in the mountains surrounding Camp David, which would mirror the attack which assassinated the Obama SEALS.

I will state the logic of this plainly. It is not logical that if the restless Khadaffi terrorists engaged in this, nor Islam al Qaeda was involved, that there would be this lying by the regime, as it would gain sympathy and support.
This was not a Jared Loughner with BATF intrigue to keep Sarah Palin from running for President, as the Obama entourage travelling bus tour was a dry run for in a sympathy smear again on the Tea Party as Obama traveled to hick Minnesota.

Conclusion then formulates that this was military engaged in the Wes Clarke fingerprints on the original leak of Marine One plans and countermeasures of the Clinton left, but with a greater possibility of what this blog warned exclusively of in the irate Special Forces who concluded at the murder to Team Six that Mr. Obama had hung them out to dry.

This very much appears that a trained team, tripped the wires surrounded Camp David, as CD is a Naval support base, manned by the Navy and Marines........put bluntly the sappers got into the wire and either left a SAM calling card as a message to Mr. Obama or there was some type of firefight there in which forces were neutralized.
Logic points to the calling card on one of the mountains coming in which left the abortive measures of Marine One.

Marine One can land in a hole in a cave, at midnight, in a fog after a 3 day darkness........weather as reported does not affect that helo, and that points to the helo was a target in the passenger inside was the target.

To know the itinerary of Mr. Obama, again points to a high level operational placement.

There were reports the Catoctin Mountain Park in which Camp David is located was being shut down on the very day Mr. Obama was traveling there.
The last weekend of summer, a national holiday, and for some reason the area is being shut down in key locations?
Security winded an event and "someone" dropped a coordinated track while Marine One was on the way to the LZ, deliberately to divert the helo as ABC is puzzling over.

Logic points to the group with motive, as there are numerous groups now, but the only one which the regime would lie about as it would ruin Mr. Obama, is if some democrat political officers in a special forces group sent a calling card to the regime. In short, America would shudder to it's core if word got out the military was in open revolt in shooting one across Marine One's bow.

Full recall that Dr. Jerome Corsi's sources speak of "Obama resigning", and this very well could be a reminder to Mr. Obama exactly what is waiting for him if he does not fade away.

There was a definite event against Marine One. It's cover up to the Obama puppy press notes it was a group who would not gain Mr. Obama sympathy, but would shake the foundation of the political structure.
Could it be Muslim Brotherhood oriented? It is doubtful as Mr. Obama is handing over every nation to them.
Could it be Khadaffi or Assad? Unlikely as Mr. Obama would trumpet this to attack Syria and use Khadaffi as a sympathy vote.

Only this blog pointed out that the Minnesota bus tour had things completely off in it. Yes it appeared a dry run, but with Obama isolated in Air Force One and not riding his buses, all points to a Secret Service ring put around this problem child, and the child was scared enough to follow orders to lessen the signature.

Therefore in final deduction, Mr. Obama was reminded of the reality of his position, and this reminder came directly from the political officers and the Special Ops with full backing of the key democrats and intelligence, or else, some smoking craters would be in those mountains in American security fighting American security.........and Mr. Obama would have gone for a snow cone with his date in Maryland before rushing home to the White House bunker.

ABC printed the lie, and questioned it. Therefore an event against Marine One took place the regime is covering up.

The big guns are at play and the fight has started amongst key elements. I warned that murder of the Obama SEALS was a problem.

Mr. Obama must stop exposing his children and using them as a protective shield like som 3rd world despot and this group had better not scuff the kid who runs like a duck.

In a highly unusual maneuver, President Obama’s 30 minute flight to the Presidential mountain retreat at Camp David this afternoon was diverted to an undisclosed landing near Frederick, Maryland and a motorcade assembled to drive him to the nearby site. White House press secretary Jay Carney tells ABC News a “bad weather call” was made before the President and his younger daughter Sasha even boarded the aircraft.

Carney says they have now arrived safely at Camp David. It remains unexplained why the President would be allowed to board Marine One knowing that the landing site on the mountain was experiencing weather making a landing difficult.

The press first learned of the diversion when wire agency still photographers, who traditionally stand by at Camp David for news coverage in case of an emergency, were told by the military at the mountain top Marine base that the President would be motorcading.

The White House press office did not inform the daily travel pool which remains at the White House and does not make the helicopter trip to Camp David. The pool would normally accompany any bad weather motorcade to the retreat.

In Washington at the time Marine One took off, according to Accuweather.com, there was no precipitation across the entire region, including Camp David.

Light winds blew from the southeast at 10mph with mostly cloudy skies and temperatures in the middle 70′s.