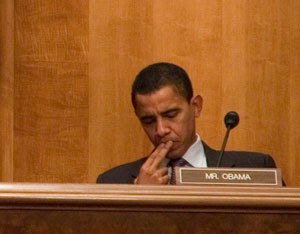 The 41-year old Obama, having won one of Illinois two Senatorial seats in 2005, is seen by many on Capitol Hill as heir-apparent to many of the non-proliferation concerns spearheaded by Lugar.


There once was a crippled up old journalist named Sherman Skolnick who uncovered more Chicago dirt than the universe could hold. One of the leads Skolnick unearthed in August 2005 was a strange event in Perm, Siberia, Russia, in which nuclear weapon's inspection by a US Senate delegation was placed under detention by Vladamir Putin when it tried to leave a base in Perm.
At stake was something on that US military airliner, and in detention the the US delegation was not allowed to leave their dismal holding area.......until their passports were turned over to the Russian authorities.

One of those detained was Barack Hussein Obama, on his maiden trip as a Senator from Illinois, and there the intrigue begins as Skolnick's reports on Obama being born in Kenya already in 2005, set in fast motion the Obama "need" to sanitize his passport files.
If you recall in McCain, Clinton and Obama stories, "someone" was poking around in those files of "all three", but the reality is the group was looking at Obama's files, and one such person ended up murdered in their Church parking lot over the information they saw.

What this goes back to is Putin's FSB, already knew in 2005 that Barack Obama was a Kenyan national and Putin was engaged in his Polonium assassination nuclear war in pissing on the hydrant of Britain in the murder of Alexander Litvinenko.
Of course, Lugar's group was loaded with intelligence operatives, and they had things which they were not supposed to have and that is what the demand was for in searching the plane, but it was as it always is with Putin who was staged to be with President Reagan as "just another Russian citizen on the street", more was going on than met the eye.

No one has bothered to ask what price America has paid for Obama being British and illegal, in order to keep Vladamir Putin and Russia quiet?

This blog has catalogued the price exclusively and repeats it here in expansion:

1. Obama turned over the entire eastern bloc to Putin.

2. Obama allowed the annexation of Ukraine.

3. Obama has thwarted all reigning in of Iran as Putin protects the Persians.

4. Obama shut down any FBI inquiry into the Russian mass murder of the entire Polish Government.

5. Obama signed into law the absolute disarmament of these United States in the nuclear theater.

No one has yet asked the questions in linking the rumors of Obama having "studied" in Russia for a year. This blog in inquiring of the university there, was not replied to. But the question is, "Did in 2005, Vladamir Putin, know to detain Obama as "British", because Obama had records like in America, of being a student of foreign birth and was using a foreign aid package to gain financial assistance?"

This all reaches back to the entire Obama menagerie of Bill Ayers in being an asset of the US Government to keep helter skelter from breaking out Charlie Manson style among US liberal children in colleges.
This is why Ayers was never prosecuted for rape and murder. It was Ayers as this blog exclusively exposed assassinated his won Weathermen team who were about to mass murder US military people in New York.

I never used the word, but this is Bill Ayers:

It is the like genesis of why Rahm Emanuel was not prosecuted for the Rod Blagovich bribery scheme, is because Rahm Emanuel is a double asset of Mosaad and US intel.
Emanuel according to Skolnick was part of the money laundering trade in the Chicago commodities in paying for assassinations inside America and outside.

One starts noticing patterns in this, as has been exclusively noted here, in Obama's adoptive mum was working for intel at Ford Foundation setting up global economic rape of the poor in the 3rd world in 'microfinance'.
Zbigniew Brzezinski is in Obama's closeted past in New York as a mentor.
Bill Ayers is a US mole in the intelligence field.

It is why Obama's records were cleansed and why his records keep showing up with screwy smiley faces on them, it is because the Kremlin is f*cking with Obama, and it is Vladamir Putin who is gaining the blackmail laugh.

This is why Obama and Clinton were messing around in Russian politics in trying to give Putin a problem at home to deal with, so he would not be a problem for Obama's second term. Putin was too adept in this and has been doing as he pleases from feeding Iran intel, backing Pak intel which is backing Afghanistan against America and sending in troops and selling weapons to Syria.
Yes Putin has been told, he can blow his wad, but then Putin will be exposed and be forced to give back all the goodies Obama has put out for the Kremlin.

If one adds up the costs to Europe and America in what Obama has had to pay out to Putin in that 2005 adventure, the reality is, it has bred a world war in the making which no one is ever going to recover from.

Barack Obama was never a British spy. Obama is a cartel boy of world order visions who answers as this blog exposed to the central European banking cartel of the Ashkenaz Rothschilds.

There is not one group or government who does not know of the Obama crimes, and all have been paid off in nations or trillions of dollars.

What no one has ever though put together in this, is the complete Russian connection in Stanley A. Dunham or Pop, was a communist, like Paul Robeson, like Uncle Frank Marshall Davis, like Stanley Ann, and the Kremlin has had an asset file on Obama, not as a Brit, but as "one of their own".

The polite word is blackmail in this. The word which gets Barack Hussein Obama before a Military Court is one which has him meted the same end the Rosenberg's were sentenced to for espionage as Barack Obama has been a quasi Kremlin asset while working for the Berlin cartel, as his family has been involved with for a generation.

You should have been paying attention children and should have asked yourself why screwy Wayne Madsen's writings and Sherman Skolnick's exclusives seemed just out of balance in too many fingers in the cherry pie.

Now you know the thin veneer tying the real intel to the rumor and planted intel.

Lugar's stooge.......same Lugar who was in bed early with Minnesota election thief Al Franken who Karl Rove turned a blind eye to, so Eric Holder would not prosecute the Bush clan.

Oh and if you want to reach back, this goes back to Eric Holder as an intelligence asset handling Marc Rich, who get got the Clinton's to sign a pardon for in all those billions Rich laundered for Iran and Iraq, and in this case it is Holder who is the glue as an asset in managing Obama's crimes for the Berlin cartel who Holder works for.

It is why Issa of the GOP is not collecting on Holder's head, and leaving Obama steal the 2012 election, as these are the assets of the International Socialists as exposed here.
Holder and Obama set up Gun Runner to protect the drug and contraband traffic in the American sphere and to graduate it to assassinate Americans when necessary.
Is the same club Obama's benefactors set up with al Qaeda in Africa to run dope into Europe.

We now return you to the heir apparent, that colonial bastard Obama.

Do you think Anthony Ulsterman will figure this out, or his insiders, or ......will another Chicago dead guy just not matter in Donald Young or....