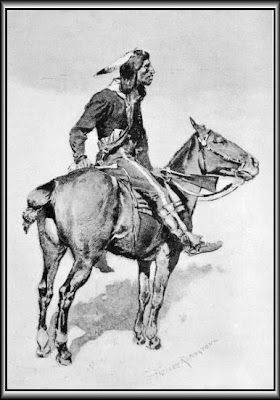 It is always pleasant to find real history and today we have Mr. Wolf Voice, of the Cheyenne Army Scouts, the Chis Chis Chash as the Cheyenne termed themselves.

Here then for a historical reality is the voice of the Northern Cheyenne out hunting Sioux Indians behaving badly.


Mr. Wolf Voice had sound judgments on miltary matters which were to the point in how the US Army dislodged the terroristic Sioux from their dug in quarters. Yes the Sioux did dig rifle pits to guard their position as they learned from the white military.

Next we find an assessment of the Sioux being beaten by US Army tactics, and the not so modern or even not so Little Big Horn ally of the Sioux in these Cheyenne.

Yes the Indian had colourful language of all types of curses in many languages for their enemy, Remington had been entrusted to them in very hostile Sioux country, and being beaten by Gen. Miles, the Cheyenne were as trustworthy in keeping the American icon safe as an Irish copper in New York would be in keeping Remington.

Black figures of animals walking slowly along were “starving bronchos abandoned by the hostiles.” “Cowboy he catch ’em,” said Wolf-Voice. I explained that Colonel Offley had orders not to allow any citizens to cross the Cheyenne River. “Cowboy he go give um dam; he come alle samee.”

Always nice to see the Civilians obeying the mandates of the federal, by ignoring them to take possession of the economic prize.

We leave this touch of history with the words of Frederick Remington in assessing all of this in the Brule' Sioux who came into camp begging rations and informing Remington he would not be harmed if he passed through with the wagon.

Three or four Brulés are let in through our pickets, and come “wagging their tails,” as Two-Moons says, but adding, “Don’t you trust the Sioux.” They protest their good intentions, borrow tobacco, and say Lieutenant Casey can send in a wagon for commissaries to Pine Ridge, and also that I can go through their lines with it. Were there ever greater liars on earth?

Yes modern fiction writes a different view of the Indian, but the problem is these Indians for the greater part now all believe this fiction and think they are all one big victim family when it was the Sioux perpetrating genocide on the mass of people on the central great plains.......white, red, yellow and whatever color.