A Tale of Two Islands 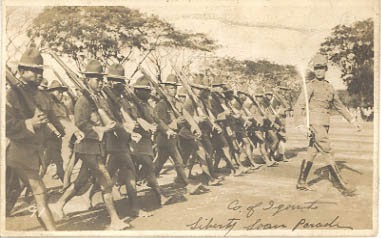 Dichotomy is always of interest in the best of times and the worst of times. As I have invested a great deal in the dichotomy of attempting to teach educated idiots, I find niches of history a thing to expound upon.

To say terms like Americans, Europeans or Africans is as uninformed as saying all birds are ducks. Americans are different regional peoples, as much as Europeans and Africans are different races within the race.
The American Indian was a diverse group like Africans, and in that I meld this into the Philippines as one still speaks of Filipinos as one people, when they were a group of highland and lowland peoples, in speaking different languages within even those regions.

At the initiation of American control by Krag rifle in 1898, the year after 1897 in which for the Spanish colonies America was to provide the munitions to slaughter Germans beginning in 1914 in World War I, the Philippines was in a sphere of superpowers.
You will recall the French were later driven out of the Vietnam. The Dutch in their Royal Shell oil company built on the Spice Island trade controlled Indochina. The British had Hong Kong and various other tidbits, and Spain ruled the Philippines as Japan was in Korea and the island of Formosa.

Forgive the nostalgia, but I much prefer Formosa and Ceylon to Taiwan and Sri Lanka. There was something pretty in those names, even if not pretty things were involved on those islands.

Formosa would be taken over by the Free Chinese when Harry Truman gave China over to the communist Maoists. Before that advent in 1898, it was under the rule of the Japanese Empire.

The reality is Formosa and the Philippines are the same peoples, for both had mountain peoples who were head hunters. The Spanish never had any fortune with dealing with these savages or wild people, but the Japanese in the American era had embarked upon a control measure which should never be forgotten.

The Americans always had a policy of trying to civilize and then assimiliate the American Indian by Christian virtues and farming. When that did not bear fruit and terrorism erupted, the military arm was unleashed.
In the Philippines, the lowland Filipino who was a savage 400 years earlier in 1500, despised the savages of the mountains. They honestly desired as remedy to just exterminate the populations in groups of 50,000 to remedy the problem. If Filipino people power rule had been allowed in 1900, this is what would have taken place in the Philippines at Luzon.

The Americans though attempted to civilize these wild men and women. It is important to differentiate between pure savages and wild peoples. The American Indian for the most part, except in rare Algonquin, Navajo and Mandan peoples were savages in having no organized farming or industry.
The Filipino head hunter though, was a people who had metal work, basketry, building terraces using irrigation, even if they were seperated in warring rancherios.

It was this people the Americans were trying to save as George Bush was trying to save Muslims from nuclear annihilation after 9 11. The lowland Filipino desired to rid the world of these dangerous people while the American entered these tribes with an attempt to install rule of law, crime and punishment, as well as protection, and to join these peoples in roads and education by making them  Christians, where the Spanish and the Vatican had failed.
History reveals the monumental efforts of the Americans succeeded and saved 1 million head hunters from extermination much to the credit of Americans.

In dichotomy, at the same period of time, the Japanese were dealing with the mountain peoples of Formosa in 1910. Their rule could do nothing to bring about the American results using justice and trust in Luzon.

The Japanese answer was to build barb wire fences, not for livestock, but in this forerunner of razor wire, to enclose these wild peoples in steel, and then electrify the wires.
The purpose was then to send in the military in sweeps and drive the wild peoples to the wire where they would be terminated.

The Times wrote of this final solution, it was in print in Kobe Japan papers and a Shanghai correspondent all confirmed this. The most savage or militant of the Formosa mountain peoples numbering 50,000 were to be "caged".

The Governor General of Japan was quoted in the Chronicle newspaper that the tribe would be "suppressed" in three years at a cost of 17 million yen. The wire was said to be as harmless as any fencing during the day, but the Formosans knew how deadly it was at night when it was electrified.

I do not make judgment on this as it was not any business of the west or Americans what Japan was administering to it's populations under it's control. No nation has the right to dictate or interfere what is being done to other peoples under other peoples rule no matter heinous or harmless, as no nation has that kind of treasury to spend as America has found out in nation building and no government has a right to demand it's young men to die for humanitarian reasons of a people in distress.

The Japanese had success in dealing with populations into World War II, which made them a much hated people.

It is interesting to examine that both America and Japan were both blamed and shown the door from nations under their administration, for both good and for evil, as neither populations appreciated the humanity and named all barbarity.

It is even more interesting to examine that in the 1910 Theodore Roosevelt era, Americans were as humanitarian Christian ethic transforming savages in their own lands as the Philippines store reveals. America though under foreign agent Birther Hussein Obama Chin, whose origins are from the Philippine lowlands in Chinese Japanese lineage, built upon the democratic Bill Clinton era of Kosovo Muslim Wars against Serbian Chrisitans, a policy of not civilizing the savages, but to seize lands and turn them over to terrorists, to use them as Zbigniew Brzezinski militants for the global chessboard spreading violence worldwide.

The Ronald Regan era contained the militant Muhajadeen, but the Clinton and Obama eras set these terrorists not loose just in Europe, but put them into control of Islamic nations.

In examination of this, what was more sinister, the Japanese use of electric wire to exterminate savages, the Bill Clinton policy of putting savages into Kosovo in transplanting them, or the wholesale importation and turning over entire Islamic nations to Muslim savages as terror state enforcers?

Bush43 attempted the civilizing of the savage on the proven colonial method, but without the Christianity which was necessary, but that has been wiped out in the Age of Obama.

This is all historical reality and is even more important today as it was a century ago, as the age is now nuclear, and instead of exterminating the savages or attempting to Christianize them in a rule of law in their own lands, but entire nations have been handed over to the savages with weapons of mass destruction provided for them, as this fits the global order.

There was in 1910 a call to abandon the Philippines to their own peoples. Of course this call was Obama's call in Iraq and Afghanistan, which was simply a cartel measure of turning dope, ores and oil over to terror conduits and Chicoms in the Obama order. If the Philippines had been abandoned, the Japanese in all probability would have taken them and exterminated the wild peoples, as they did numbers of lowland peoples in World War II occupation.

For now all the dead Muslim's sake in Pan Islam, American should have elected John McCain who would have maintained it, and in 2016 elected Vice President Sarah Palin for a peaceful transition to self rule. That is obvious, but hindsight is deprived often of the past in examples like Formosa and the Philippines to educate an ignorant population warped by propaganda.

There is only so much education I can accomplish as too many minds are as closed to the Truth as their pocketbooks are to donating here.


"Perhaps it is more accurate to say that our ignorance is the logical result of our indifference."

Cornélis de Witt Willcox
Posted by Lame Cherry at 12:00 AM