and the Puntz shall set you free 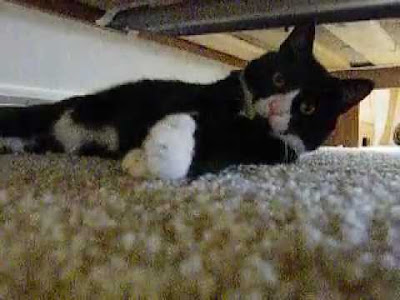 So I crawl under here to see how stupid you are and here you are proving the point.

I am sitting here listening to TL sand a project as the Puntz is assisting. That cat has come a very long way since the riddance of the toxic mother the day after Thanksgiving. She is though a reality of the Tale of Two Puntz.

For example, the Puntz hates big boots, coveralls, clomping sounds and now big plastic lids on 5 gallon buckets. Lord God this morning I was making cereal (that would be calf milk replacer and cheap dog food) for the kitties outside, and was trying to get things done as I had forgotten and left the buckets out in below freezing weather, when the Puntz took up her position where the mother used to sit at the table and looks at me like she wants to kill me.
Remember last year I almost killed that cat when she jumped me from behind with coveralls on, and tore the shit out of my calf muscle.

So today as the lid was there, we got the cat squall and in protecting me, I got the broom, and then it was battle royale. I was trying to swoosh her away, but she was having none of it, and we had a literal broom and cat fight, where stupid kitty bit the handle and discovered her teeth are not Supercat and got hurt.
I finally got her into the living room, but that cat will not give ground, not an inch. I would never take her on with bare legs, ever. Whether it is water spray bottle or broom, that cat is a die hard and she intends me to do the dying.

The sweetheart though is now sitting by me assisting and the pooooootss purr at me in delight. I poke my finger at her, and she sniffs it and is the most loving cat. She is about a 30 second mad in she forgets easy and is happy cat again as fast as she is mad.

Her new discovery as smart kittie, is she pushes like a pig to get under the covers. It is cold here, like 30 below cold, so the Puntz gets on the bed and lays under the covers. I laid on her once and was glad I did not hurt her, but she usually does not say a thing, is this lump on the bed almost unnoticeable and now does not move or say anything if I get close to her.

Odd of her, in the other night she decided that under the covers with me was a good idea to explore until she got under there. Then it was this was not so interesting, and out she came again.  Instead our recreation time is usually at sun up to feed her, or if I lay in bed too long, then I get this claw into my forearm or sometimes my back which she knows how to stick in far enough to hurt, but not far enough to break the skin and bleed.

She is though doing so much better in her intestines since whatever shit the mother was feeding her has run out. When it warms that bedroom is going to be taken apart, as there are things that are still missing and I don't know where that woman stuffed them. There is a cheese cutter, a pocket knife I gave TL, two pillows and I am sure other things will appear which I had not noticed.  I am pleased that Poot is doing so much better and stopped being psycho at times in being lethal.

Most nights she is on the bed and is either sleeping at top of TL or me on top of the covers. Except for a couple of days, she has not slept in the mother's room. Yes not bribing a cat with toxic food is a reason for a cat not having any interest in a room.
It is still frustrating in the mother in all of this, in how someone could be this shitty. I even inquired if she had brain cancer or something else wrong in the head, but this was just her and her nurturing the toxicity of others. Life in the brier patch is hard enough without that kind of inflicting and no animal deserved to be exposed to that kind of malice.

Before Poot I had no idea there were such things as Tuxedo Cats. Odd thing is they all have the same expression it seems of knowing how stupid people are. Poot is now on the back of the couch, studying TL sanding in the kitchen. When TL comes in here, Poot will jump onto the recliner footstool where we share a blanket for our feet, and she will then leap up, and lay on my legs. I have no idea the preferences. As in bed it is TL who gets most of the attention. I am the go to girl though for food and potty breaks while we are in bed.
The radio though gets sat on, turned on and the time changed. Sometimes it is a common thing and sometimes it does not happen for months.
Cats are like women, you are never going to figure them out. Lord God and if they are like the mother, you almost go nuts with the new insanity which appears.

It bugs me that I like this cat in being attached to her. I have a cat outside that chose me in Dots, he follows me around, goes love velcro when I pick him up, and now has learned that in order to keep from running him over, when I open the door to the pick up when we get home, he jumps in and just loves riding around inside.
You could not find two polar opposite cats.  Dots has affection to give a thousand people while Poot loves to selectively express her attention in amplified emotions.

I really want to get a hunting Irish Setter, but the non donors and the Puntz in possession of the situation has put that on End Times hold.  I still think of that little mop of fur in my pocket as we went for a walk when we saved her from death two years ago. I had  no idea what the cat was inside of her and I still do not know what this cat is all about.
Poot is the dichotomy enigma.