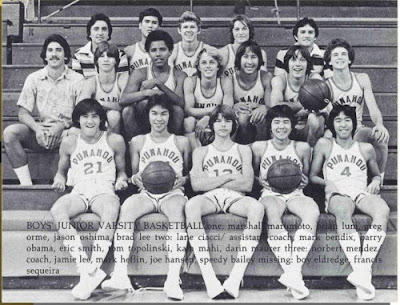 You know when a historical Barack Hussein Obama outs you as a racist, that is a pretty serious charge, a charge backed up, that Barry Obama was so trough that he assaulted the racist who called him an Uncle Tom and broke the kids nose.

Never mind for a moment in the above photo, that Barry Obama looks like he is 25 years old compared to 16 year old boys, let us just weigh the facts that image Obama is now claiming that someone on his team was a racist and he assaulted this boy. The story was told to that drunk Bruce Springsteen who really agreed that Barry should be beating up little boys.

LISTEN: Obama says he once broke a classmate's nose for calling him a racial slur https://t.co/McYOIq04MD pic.twitter.com/Ts0eex7a8R

Honestly, like all things Obama, like his fake birth abstract, his fake signing up for selective service and his fake American Blackism as he was registered as a foreign student for free education you paid for in college, I don't believe a word of this story, any more than I believe anything Barack Obama ever had Bill Ayers write in Dreams of My Obama.

No one else believe this story either.

Barry Obama was known as a gym rat. All he did was carry around a basketball, smoke choom to get stoned and drank whiskey in his urine soaked undies with the perv Uncle Frank Davis Marshall who probably raped Stanley Ann Dunham as a teenage girl.

Not one memory of those who knew Obama, indicates he ever had the manhood to start a fight.  He was the token Negro and he used it.

The fact is Barack Obama said he assaulted a racist and broke the kid's nose. That is a large event even in the period of 1977 to 1979 in high school, and a kid with a broken nose would be a record for the school, the hospital and no doubt the authorities. See when you break someone's nose, it bleeds like a broken nose. The person gets two black eyes as it is trauma and there is not any hiding something like this.
Coaches tend to notice bloody floors and kids with black eyes, and yet none of the coaches recalled tough Barry and not one of the classmates or team mates ever mentioned this incident, which if you remember you high school days, you pretty well knew the stories of who got their asses kicked by who, and yet only image Obama now remembers his sport tough creds in beating a kid with one punch, as of course the kid did not fight back in this story, as Barry Obama just got to pop other kids and they took it without trying to kick his nuts into his throat. 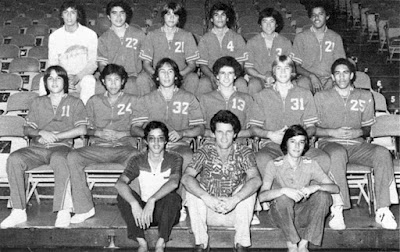 This is a pretty big historical story, and should not the kid that Obama broke bones in come forward and like other Obama moments, have a beer with Barry and we all can have a healing moment, as this is a story which is easy to confirm, as there were less than 20 kids in this orbit.

In reality, the only kid who appears Black is the one in the photo above in #25, and seriously that kid would have beat the shit out of Barry Obama and not been Obama's punching bag. So Barry Obama, no one believes you, except the drunk rock n roller, so you are being called a liar again, so come forward with the kid's name you said you assaulted and let's clear this up as the only thing you hit was a joint your entire life.