Will the real Donald Trump please Stand Up 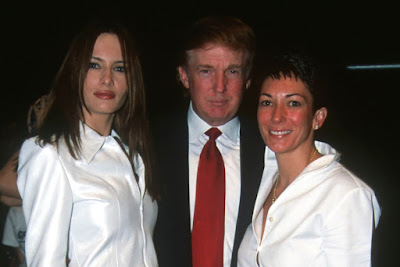 R. Emmit Tyrell was posting suggestions for Donald Trump, and this very gifted mind happened to ponder something which has escaped him. I have highlighted it, as it is important, and it is the realty that Donald John Trump has been monitored by intelligence agencies for a very long time and been groomed by several of them, the chief of which was his last employer in the Defense Intelligence Agency, who bed him line and played him like a fish........played all of us like fish.

What on earth was it, that caused the CIA Bush fam and CIA Clintons to unleash on Donald Trump, after all Hillary had it in the bag and was going to win. They rolled out operative Stefan Halper to frame a number of Trump associates as the FBI as the operational wing for CIA Director John Brennan's operation against the Trump campaign, had gone rogue in election meddling with Brennan ranting that Donald Trump was a Russian agent.

Look again at the photo I have posted a few times. There is Donald Trump on the yacht of Robert Maxwell, on the far right, of British MI6 and Mosaad, who was assassinated on that yacht for trying to leverage money out of Mosaad.
Next to Donald Trump is Senator John Tower of Texas, the highest of powers in the Senate, who was set up too, and assassinated on a plane crash in Alaska.

Then there is Mosaad katsa, the now dead Mike Wallace of CBS New York, Mockingbird, whose son Chris was installed by Oz Rupert Murdoch, another Jew from MI6, who knew Donald Trump had the Coronavirus before the President took the test, in an assassination attempt. 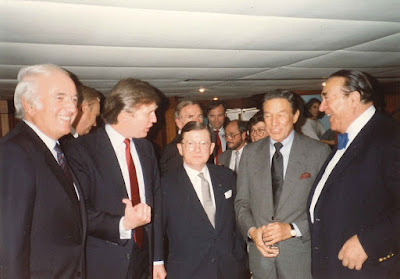 In connection to all of this is Robert Maxwell's daughter, Jizzy, who was the pimp who acquired young girls for pedophile blackmailer for Mosaad, in Jeffrey Epstein, murdered in a New York prison to silence his role in international control and blackmail in the honeypot scheme.

Word now circulates that it was Epstein who introduced Melania to Donald Trump and that the women of Mar A Lago were there for Epstein and Donald Trump.

Then there is the reality that Jizzy Maxwell, a rather sodden women in need of Jew cock, offered to tell a 60 Minutes producer all sorts of things about recordings of Bill Clinton and Donald Trump. The problem with the ragged  ratty looking CBS producer of 60 Minutes, is yes he is a Shylock, but what woman would want to be bedded by him, and why would Jizzy offer up the dirt on Trump and Clinton, knowing this was high stakes global control in blackmail, and her father had been assassinated for jerking Mosaad around,  so what chance did she have for blowing a Mosaad operation and jackpot for revealing the information for a fuck from a Jew who looked like he would need to pay for sex.

Then there is the charge by this producer that Steve Bannon tried to 25th Amendment Donald Trump and become President. Bannon denies it all, but this Jew has a most figurative imagination in selling books. The right is condemned on conspiracy theories, but the left publishes chit that does not add up under scrutiny and is quoted as fact.

Jizzy would not comply with the 60 Minutes set up and while she supported Hillary, she also is the one who Donald Trump kept saying nice things about.

See there is a great deal to see if you go to memory alpha and begin examining the record, and pondering why the intelligence community was so focused on Donald Trump, in who was backing him really, and who it was that pulled off the stop of Hillary Clinton stealing the 2016 AD in the year of our Lord election.

It is evident now that everything about Donald Trump was a diversion, to criminalize Nationalism in America which culminated on January 6th. The coups stopped MAGA dead in it's tracks, and Trump worked a deal to save himself and his family, and all his problems appear to be disappearing as he fillets the Mitch McConnell and Mitt Romney GOPliters. He is filling the void and the space as America moves to the Webster Tarpley split DNC in communists and nazis running America.

This is Crazy Train and down the rabbit hole. It is the enigma who Donald Trump was and is, which none of us really know. Donald Trump warned Joe Biden about the 25th Amendment. He knew it was coming and he had been informed of this. Donald Trump is a great deal more informed than his detractors like Scaramucci and Bolton were fooled by. Donald Trump got what he wanted out of 2020 as he agreed to it. He should be building the 3rd Temple, but I doubt he will comprehend what a checkmate this would be.

For now the proof is Donald Trump has been let off, as he has fulfilled what was required of him, and he is able to continue on fulfilling what the 1% will allow in their agenda. That is what was to be watched in the lawsuits disappearing and the charges. It is a good thing that Ivanka is not going to be in Congress, as it would only limit her. Remember that it was Rupert Murdoch of MI6's Chicom wife, Wendi Deng who promoted the marriage of slum lord Jared with Russian money ties, as she bedded Vladimir Putin. The Trumps have been on the radar of the global IC for sometime.

The real Donald Trump will never stand up. All we will ever receive are the shadows of movement to discern things. Who Obama was we will never know. Time moves on and we are left by design to ask, "What the hell was that all about?"