Didn't the Coronavirus all begin with the Arab SARS that Tel Aviv Created in Their Lab? 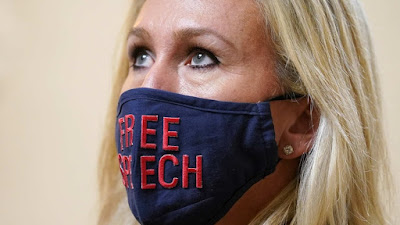 “Marjorie is wrong, and her intentional decision to compare the horrors of the Holocaust with wearing masks is appalling. The Holocaust is the greatest atrocity committed in history. The fact that this needs to be stated today is deeply troubling,” Minority Leader Kevin McCarthy (R-Calif.) said in a statement.

No Kevin McCarthy, you should become educated.

Nearly 7 million women in developing countries are treated for complications from unsafe abortions annually, and at least 22,000 die from abortion-related ...

Feb 4, 1989 ... A Soviet weekly newspaper today published the most detailed accounting of Stalin's victims yet presented to a mass audience here, indicating ...

Oct 23, 2011 ... At least 45 million people were worked, starved or beaten to death in China over these four years; the worldwide death toll of the Second World ...

The Lame Cherry has already addressed the Catholic named Holocaust for Jewry, according to now deleted Red Cross records. The number of 6 million Jews dying in the Holocaust is fiction. There was not enough resources in Germany nor time to cremate that many bodies.

Real statistics revealed the numbers were padded in "dead Jews" were taken from Soviet army deaths and other types of deaths, which had nothing to do with the German WORK camps, which became death camps after Russia, British Bomber Harris and the United States, blew up the supply lines and manufacturing in Germany, which in turn infected Jews with typhus to spread that plague which was compounded by starvation from allied bombing.

Clothes were taken as was hair shaved to get rid of lice which spread typhus. The United States used Zyklon to kill lice. The Germans did too, and shower were for killing lice, not Jews, as dead Jews could not be the slave labor force, like the French and Slavs to fund the German economy and war effort.

That background must be brought into Kevin McCarthy's fiction as the allies had a part in killing the Jews, and the real numbers were around 1.3 million dead. Most nations in World War II had as many if not more dead in the war than Jews, who were sold by their elders to work for the Nazis, to save themselves and barter it later for the 1948 country of  Tel Aviv.

So the comparison of Jews wearing gold stars and Americans and others being forced to wear masks, is legitimate, and more so as Fauci's vax is killing and harming people. There are more dead from this vax than from all other vaccines in the past decade.

Worst is a term not of numbers. The Sioux exterminated most of the Pawnee, Ree, Mandan and Gros Ventre. That was the the worst for those people, because they did not number 5 million Ashkenazi. Worst is what Barack Hussein Obama's Luo Arab Blacks did to other Africans in seizing them and selling them as slave in entire villages captured.

As the GOPlites want to discuss worst, then let us discuss the generational blame, extermination from wars and vaccines of the Anglo Saxon in America for patriotic wars. The American South was wiped out of it's ruling class by Washington City over a political rivalry in Big East money backed by the Rothschild bankers who were backing the South too. The United States is in the midst of a genocide which will be the worst in history, as it joins the billions who will perish in the coming years from vax and wars.

American aristocrats in the Rockefellers funded the Nazi. The Warburgs ran Roosevelts money war and refused to bomb German industry like IG Farben, who gave the money to put Hitler into power as the Bush family shuttled money around in America. The Schiffs funded the communists out of New York for the Russian revolution. So make it a full account as Soros and Buffett funded Obama's intifada run out of the DIA which now has 100 million Americans hunted down by the FBI for January 6th in  a set up, as Kevin McCarthy's fixation is on the Holocaust as the Jewish ghetto of Gaza is being raised again, as a global war is being ushered in again to slaughter billions.

.........and Harry Truman turned China over to the communists.

I wonder why Kevin McCarthy and the GOP can not see atrocities in the ADL and Southern Poverty Law Center criminalizing Americans for thinking, in a first step for Homeland and the FBI to come knocking on more people's doors, as America adds to this millions incarcerated in the profit prison system, and the CDC spreads measles at Disney Land to cause hysteria as the FBI has domestic terrorists to increase the size of their budget to hunt down White People, the way they used to hunt down Italians in the mob.

Aborticide babies have several times the numbers than Jews claim, and that is all legal like London and New York protecting their dope supply lines, while only murdering and imprisoning millions of others who are the competitors.

Oh and the facts are, just like the "dead" Muslims in Kosovo, after the war, lots of dead Jews reappeared in new locations, but the numbers were never adjusted.

Even with Jews garnering 6 million dead, that still leaves 39 million other people dead from atrocities in the same period, or do they not count?

Probably no more than the 11 million Germans who died after 1945 in US and Soviet custody in being starved. left to be diseased in open concentration camps.

That was the worst atrocity committed by America's 1% up until this vax operation was unleashed. For Americans erased and about to be erased, the Lame Cherry welcomes Kevin MCarthy and the GOPliters to be educated, because once this is sifted out, the 1% is not going to need these lapdogs around in the absolute power of the 1% which follows.