On a Wire and Prayer 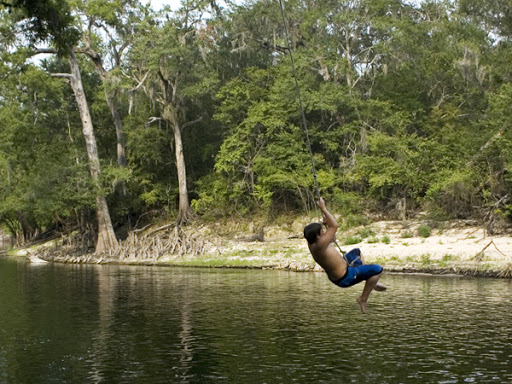 We were talking to JYG the other day and he started telling us a story of him and his friend, rigging up a wire, so they could slide down hill to the creek, and I guess jump off in it. The wire was a clothesline with a wire in it while JYG was in charge of the pulley which they could ride down on.

I'm presuming the speed of these human torpedoes was 30 to 40 mph was why would you do anything slow on a 90 degree incline.

JYG said it worked great for the first 5 times, and then he tried it again and said, "I should have known that when that line broke it would slingshot like a missile that pulley we were riding on right into my head.

Sure enough that is what it did. JYG said I heard my ankle crack so I knew I was going nowhere, so his buddy got the pick up, loaded him up, transferred to the car and to town they went for medical treatment.

He said the doctor kept asking him where the blood came from on his pants, and JYG said he  didn't know, which he did know as his skull was cracked. The doc found that wound and without Novocaine, the doc stapled his head shut.

Then the doc went to work on the foot and he said he never put on one of those boots before so he was using his knee to jam it on. JYG said at that point he was ready to clock the doctor and work him over as it hurt like hell.

The punchline in this was though when JYG said as the drove to town, they stopped at his house to eat some rice krispy treats as JYG said he really liked it when there was lot of marshmallow on the cereal as he did not like them otherwise, but his wife made them that way.

I burst out laughing as I thought he was ten years old or something, but that is JYG, he does things what kids do and he does it daily. He was painting up a skid steer today when we were searching for things, as he had some paint he got in, and sure enough, he was painting as he likes to have things look nice.

The moral of this story was though that his buddy had insurance, so he paid, but the deductible still had JYG paying 1000 dollars..........and if no insurance was involved it would have cost him a grande anyway.

He said it was all a mistake going to the doctor as he would have healed up anyway, and then they tried to get him into therapy and he said, "I don't have time for therapy, I got to go to work!".

JYG is one of my heroes in he is the kind of adult I want to be when I grow up.