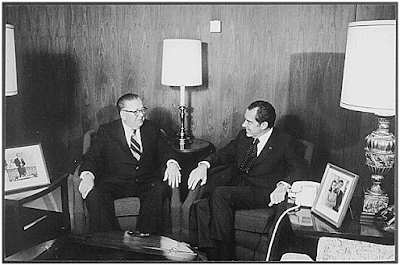 Both Nixon and Fitzsimmons possessed sufficient motive to get rid of Hoffa, Franco said, because they had much to lose if Hoffa recaptured the presidency of the nation's largest union.

'It had to be (a conspiracy) because I knew what Jimmy was waiting for (when he was taken away in the car),' Franco said. 'Jimmy and I met two weeks before. I went to Jim and Jim said, 'Sit still.' He says, 'I'm waiting for something. It cost me a million bucks.'

'He says, 'Any day Joe, any day.' He says, 'I would say within the next two or three weeks it should be delivered to me.' And they were depositions from (John) Mitchell, (John) Dean, (G. Gordon) Liddy.'