Andrew McCabe threatens the US Department of Justice 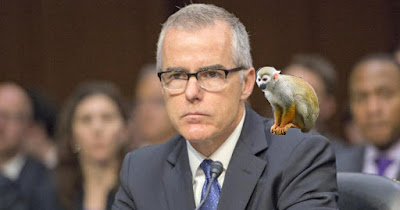 Tell them Andy the devil made you do it.


In the Andrew McCabe book tour which began on 60 Minutes, there has since his appearance, been other appearances which have involved criminal admissions. In his NBC confession, he blurted out closed door testimony to the Gang of Eight in Congress which is all confidential and a crime to make public. For all of McCabe's ranting of being in law enforcement over 20 years, and knowing what Inspector General Reports should look like, this career official is one who has forgotten the most important legal term in, ius maneo tacitus, the right to remain silent.

With Andrew McCabe rightly fired, after being part of a cabal of reprehensible white men who took advantage of the distressed damsel, Lisa Page, who has been forthcoming in her testimony, like most Americans, this blog would  be content to have this over zealous  public official to live in luxury on the income of his wealthy physician wife and no longer deal with the distasteful part he played in American history. Andrew McCabe though is instead selling his story in a new public blitz attacking not only the President, but the democrat Inspector General, and now the entire US Justice Department.

It is the last part which seems unreasonable and quite ignorant, but if one examines the forensic psychology of Andrew McCabe, everything he has done had a psyche where he thinks he is above the law and has friends in the most high places.

It all began in the dismissal of Andrew McCabe where the CIA Washington Post which smeared the innocent Judge Roy Moore of Alabama, where this blog noted what McCabe and his wife in propaganda were tampering with future jurors. That is a crime and while Roger Stone has a gag order placed on him as Paul Manafort has placed on him, Andrew McCabe is free to rant by the same Clinton Obama judiciary tampering with future jurors while attacking the President of the United States and the Justice Department.


Lame Cherry: The McCabes Attempting to Elude Arrest by US ...

Mueller's people will throw the case and the McCabe's go free. If the IG indicts them, the McCabes get of due to clever jury tampering involving the Washington Post who is known to commit crimes as in smearing the innocent Judge Roy Moore.


It is that Andrew McCabe who continues to act as if someone is putting him up to this, which is what should be setting off the red flags of the Justice Department he is threatening with a lawsuit. See I note patterns and when Mr. and Mrs. McCabe are assisted in jury tampering by the Washington Post which is CIA connected and the chief ranter of this is former CIA Director John Brennan who is yet to be indicted for running an illegal CIA operation with the FBI as a front in Peter Strzok to "get Trump", coincidences appear in a patter which is quite revealing.

It is yet to be revealed who the benefactors are of these two connected Barack Hussein Obama associates, but their symbiotic relationship, indicates by their outbursts and threats, that they are operating under the conclusion  and affirmation that have protection yet to engage in what they are engaged in.

In following this to a logical conclusion for Andrew McCabe, it would be reasoned that someone of power has promised Andrew McCabe a complete pardon and full payout, with restoration of power as a martyr in upcoming propaganda. Andrew McCabe is acting like his benefactors have promised him, no matter what he says in breaking federal law or going after the Justice Department, he will not answer for his actions, as the Justice Department as under Director James Comey at FBI and former Attorney General's Loretta Lynch and Eric Holder will sweep away the evidence as was engaged in with Hillary Rodham Clinton.

That points to the benefactors of Andrew McCabe and John Brennan have information that President Donald Trump will be defeated in 2020, and the upcoming Marxist democrat who has already been chosen from the mob of 40, will shut the Justice Department down, reward McCabe financially and pardon him of all crimes.

That is the message from Andrew McCabe as the CIA media is Mockingbird promoting a narrative of this conclusion. 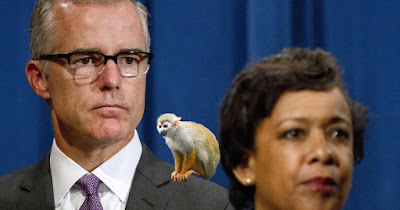 I don't have a monkey on my back just an Andy.

As one can witness in the  performance of Jeff Sessions, Rod Rosenstein to Christopher Wray, that once in the Justice System, they begin the promotion of protecting those inside the system, but once those people are outside the system and silent they remain inactive, but once Justice is attacked they become active, and Andrew McCabe is activating Justice and smearing the department.

Andrew McCabe can be promised all sorts of things, but the facts are that he is now an antagonist against the Justice Department. He is committing crimes in interviews and it is in the interest of Justice to indict and convict him. Balanced against more benefactor cronyism which points to the Obama's and Clinton's conducting more tarmac quid pro quo if Andy is a good little soldier, is a long shot unbalanced scales.
To the point in this, it is now a tale of two criminals in Andrew McCabe is blaming Rod Rosenstein, along with Lisa Page on the outside, while Justice on the inside is protecting the soon to retire Rod Rosenstein. It is a tale of two criminals, and Justice has chosen their inside man in Rosenstein to defend, and it is those on the outside who are on the outs.

It is difficult for two people in Rosenstein and McCabe to both be telling two different stories and one of them is not lying. It concludes that for Andrew McCabe to be thinking he can joust all the windmills, with CIA promotion, that he thinks he has the backing of the Deep State. That though requires a set of events which is a reality that he is not Hillary Clinton in eluding justice, because the one thing Hillary Clinton was never ignorant enough to be goaded into was to file a lawsuit against the Justice Department.

In the end, Andrew McCabe has a monkey on his back and he is becoming a monkey on the back of the US Justice Department which will not appreciate being called crooks in the federal courts. In those situations, it is the US Justice Department which like Robert Mueller begins defining people as crooks for their prestige, and let us not forget that a democrat Inspector General has in hundreds of pages of investigation concluded that Andrew McCabe was a crook and the Director of the FBI fired Andrew McCabe for being a crook.

When it comes down to it, who do you think the FBI Agents will be loyal to, Director Wray or the guy calling them crooks for firing him? 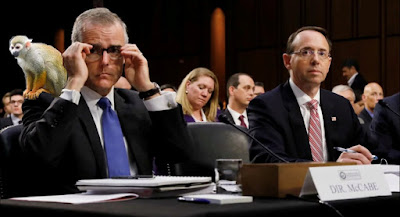 Will the man with the monkey on his back please surrender.