John Durham says there is a Missing Link in Russian Collusion 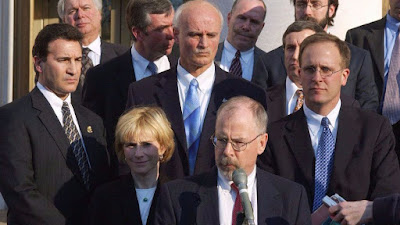 “We do not agree with some of the report’s conclusions as to the predication and how the FBI case was opened.”

When United States Attorney, John Dunham says "we", he is not using a collective like the "We are not amused", but the "we" in John Dunham's investigative world is a group of professionals unlike the nappy headed nit worshipers of messiah Obama, involved in the witch hunt against Donald Trump via Protector of America, Robert Mueller.

The faces in this crowd do not need to frame people like Donald Trump or entrap people like Michael Flynn. These are the faces that do not make reaches or assumptions. They find the facts and indict on the facts.

This is not Lisa Page in sweats or Peter Strzok with shopping bags having affairs. This is not James Comey or John Brennan in too often pressed cheap suits. These are people who even their shirts can stand up in the corner.


All eyes on Durham after rebuke of IG Horowitz's findings

US Attorney Durham, by actions and words, has revealed a greater revelation than the Department of Justice's Inspector General's Report.
The IG has authority to only investigate the DOJ. That leaves out CIA and every other entity in United States Government. That is what John Durham stated in his comments refuting the IG's report, as his investigation, included foreign intelligence and officials, and they have revealed information which does not match what the DOJ inside evidence reveals.

Predication is what John Durham utilized to challenge the IG. Predication is a conclusion based upon a series of events. John Durham has refuted the IG that how the investigation of the FBI opening the case of "Russian Collusion" is not how it really began.

A wide-ranging investigation by the Department of Justice (DOJ) inspector general (IG) found that the Federal Bureau of Investigation (FBI) deliberately doctored evidence it presented to the nation’s top spy court in order to gain authority to spy on a key Trump affiliate.


What Durham is informing the world is that there is something bigger, than the FBI through their legal counsel named Clinesmith, was framing Donald Trump for Barack Obama. Clinesmith is a direct link to James Baker who was an intimate of Director James Comey.
Remember the Comey Baker connection, as this is where the FISA warrant began with Clinesmith, according to the IG and according to released information.


At the time, Clinesmith worked under James Baker, the FBI General Counsel who was a close confidant of fired former director James Comey. Baker was one of a slew of former deputies who resigned or were fired as the Russia collusion hoax imploded. In his report, the Horowitz referred Clinesmith to DOJ authorities for criminal prosecution.


In what is common knowledge in the DOJ, Durham has discovered something in foreign sources, that the move against Donald Trump started somewhere else than what the FBI files and testimony reveal.

We know that before Operation Crossfire Hurricane, Peter Strzok and another FBI agent were in London trolling for information, and it was this reality, under the direct authority of CIA Director John Brennan, that the Strzok contacts were MI6 in London. The focus of this was Carter Page, who was an FBI asset and was being framed at the beginning of this Russian Collusion cover too.

While DOJ lawyer Stuart Evans was shutting down the Clinesmith fabrications in the first round of FISA applications, it is evident now that something else was pushing this, and as John Brennan has been ranting about Trump being a pervert, a second dossier, it appears that there was NSA intelligence as much as other foreign intelligence who were producing salacious raw intelligence, which was brainwashing James Comey and John Brennan.

This Lame Cherry has stated that Peter Strzok appears to have been part of some Internal Affairs inside Internal Affairs, tracking some person or group of traitors of spies. As no arrests have ever been made and Robert Mueller was fixated on protecting the identity of a Missing Link, who had a part in moving this internal review along, as the conduit of it was the deliberate introduction of Paul Manafort and Ukrainian contacts, and this all comes back to Ukraine election tampering.
The Lame Cherry conclusion inside this sphere was that Donald Trump was used as bait, and that John Durham has discovered what element, with a wink and a nod, for Barack Hussein Obama, was telling James Comey and John Brennan, what they expected to hear.

John Durham's statement is damning, because the IG recommended Clinesmith for criminal prosecution. Clinesmith behind bars, the engineer of Russian Collusion, and John Durham says there is another Conductor.

Didn't hear that from any other sod now did you, you non donors, so get to donating, or do you like following around asstards who make you look like fools.

https://lamecherry.blogspot.com/2019/05/devin-nunes-missing-link.html
May 9, 2019There was a multiple operational front created in this for accomplishing what has been accomplished, and to both protect those who originated this and to camouflage the Missing Link, and at this juncture to divert attention with the promise of blood, the list of spies who are being hunted and about to be exposed.

https://lamecherry.blogspot.com/2018/12/donald-trump-and-missing-link.html
Dec 16, 2018There has been a scorched earth mania by Mueller's team to find the missing link. As another Lame Cherry exclusive in matter anti mater, that missing link appears to be someone or some group from the deep state inside who negated the election theft by Hillary Clinton.

https://lamecherry.blogspot.com/2019/08/stink-stank-missing-links.html
Aug 1, 2019I remember that in the stinky mess of Pissgate, that it was Katie Walsh who was running the finances in stopping donations to Donald Trump, while her House fink finance, was proposing to her at Number 10 Downing Street, where MI Theresa May, and soon to be rewarded Prime Minister May would derail Brexit after created the Pissgate dossier in Michael Steele with the Clintons to frame Donald Trump.

https://lamecherry.blogspot.com/2019/02/rootie-toot-toot-art-of-missing-link.html
As another Lame Cherry exclusive in matter anti matter. I noticed a coincidence recently in the Lame Cherry exclusives of matter and anti matter, about the same time the publication of the Missing Link took place in a series, that all of the stories about Robert Mueller POA (Protector of America ...

https://lamecherry.blogspot.com/2019/04/the-missing-chink.html
Apr 1, 2019The Missing Link was already setting up Mike Flynn in the Trump campaign in 2015 and by 2016 the Missing Link was going through the Trump sphere in whispering to Trump friend Thomas Barrack and converts to the Trump campaign from the 3 Amigos, confirming to Thomas Barrack, with Roger Stone that Paul Manafort was the guy to solve all of Trump's ...

adam.curry.com/art/1553964162_uPMkhDnd.html
As another Lame Cherry exclusive in matter anti matter. As I type this, it has been an exhausting two days of piecing together information the Lame Cherry's Missing Link series, which has confirmed to me in bits and pieces of conversations the betrayals I knew, the using of me like a whore in thinking I would not suspect and the numb reality that from this point on, I have to tread lighlty, as ...